Aurora Art is part of Aurora Productions vof, since 1986 publisher of contemporary art with an extra dimension.

With the opening of Aurora Art Gallery in 2013 a long cherished wish became real: the possibility to show original work, not only from the artists of whom we publish work in the form of art cards, posters and books, but also from other artists in other disciplines who fit in our line.
Furthermore we organize lectures about art in an intimate setting and offer the possibility to buy original work from our collection.

It is our aim to bring about a deepening in the experience of art. After all, being occupied with art is a never ending adventure. Who can tell what art actually is? How do we look? Which layer in our experience is moved?  What moves the artist and what is his/her role in society? These and other questions we like to raise during presentations of artists with their work and with lectures of art historians.

Art history shows that always the sensitive souls who, with their craftmanship and artistry, give a foreshadowing of a turning in time. A turning which, for the majority of the world population, is only known and understood when these artists are long gone. Also at the end of the twentieth century there were artists at work, who we recognized as the proclaimers of a coming age. The qualities belonging to it, such as brotherhood, transformation, truth and freedom, we met in their subjects and in their way of life. In 1986 publishing house Aurora Productions was registered at the Chamber of Commerce. It’s aim was (and still is) to make known the work of artists as described above, artists who do not bother about the current opinions or isms, but express their own spiritual quest. We followed several artists during decades, literally mapping their results. These art cards were sold by the thousands and occasionally it happened that a painting was sold through seeing a card. Many original work found its way to collectors, governments and companies. Also Aurora Productions bought something now and then, not only for admiration but also to encourage the artists to proceed their unique path in a professional way.

Now, 30 years further and overviewing the past, we cannot avoid the thought that many work has been created which in our opinion is museumworthy. Work that asks to be seen and experienced by the many, in a time that craves for meaning, insight and comfort as well. But what will happen with the work of these artists, which is acquired by us and other collectors; what will become of their inheritance? To help safeguard their work and that of others, also from other disciplines, we therefor established the Aurora Art Foundation in September 2016. Not only to protect the works from speculation or destruction, but also to come to a museum in the future, where their work can be a reason for reflection and inspiration. A museum for introspective art, a nourishing oasis for the soul.

The Aurora Art Foundation (Chamber of Commerce no. 66771897) tries to reach her goal by: 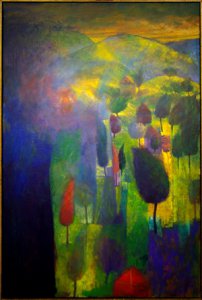 What can you do?

If you feel sympathetic towards our goal and wish to contribute to the realization of our dream, you can help in several ways: